Node-red is a graphical tool for rapidly creating working prototypes. See how you can use the tool to connect to SBanken and more!

Why looking at Node-red?

Node-red can be used to facilitate:

Node-red is an open-source platform that has been developed by IBM in 2013. It was originally designed for building Internet of Things (IoT) applications as it facilitates the integration of IoT devices and the processing of data events. However, it has evolved and been applied in a large range of domains (e.g., data processing, Industry 4.0). In general, Node-red is very interesting for the early prototyping of small applications or services. In the rest of this article we will introduce Node-red.

Technically, Node-red is built upon Node.js, which itself is a Javascript runtime engine, and thus can be executed on a wide range of computing resources starting from cloud-based virtual machines to small devices such as Raspberry Pis.

Node-red is a graphical tool that follows the Flow-based programming paradigm. It comes with a web-based graphical editor, which enables the visual programming of applications by binding pre-defined software blocks (a.k.a. nodes) together. These software blocks can be (i) off-the-shelf nodes – Node-red is supported by a very large community resulting in a large set of nodes already available; or (ii) one can implement its own node. The Figure below shows the Node-red editor. 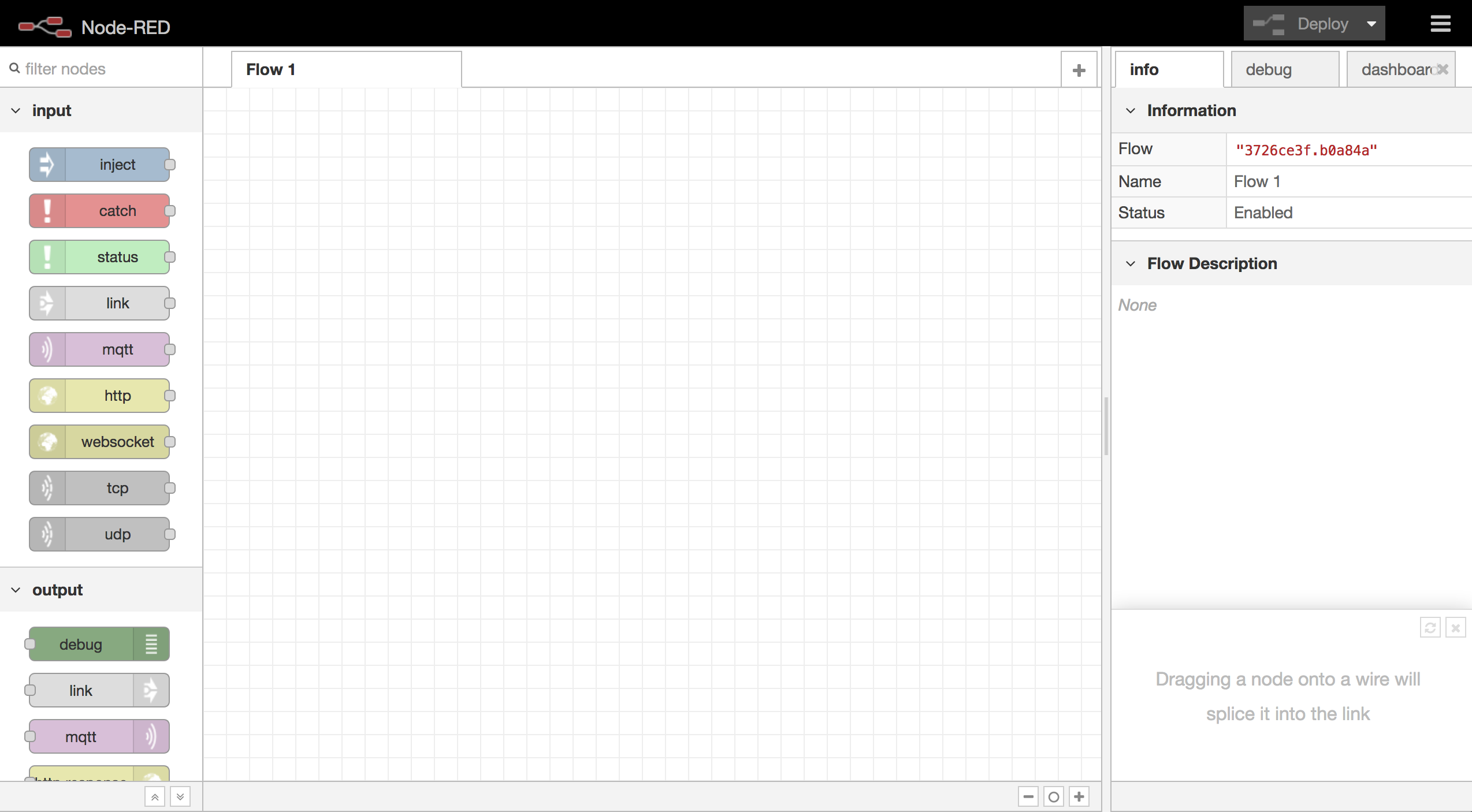 The editor is divided in three main parts:

At the very top, the “deploy” button can be used to deploy a flow making it “active” (i.e., the flow is sent to the server and executed). Further information can be found on the different type of deployment in the following pages: https://nodered.org/docs/user-guide/.

There are three main types of nodes:

How to get started

If you want to run the latest code from Git, here is how to get started:

One can start Node-red as a Docker container using the following command:

It is worth noting that Node-red can also be executed on Android smartphone.

In the following video we will present in a very simple example showing how to (i) gather data from the OpenAPI offered by S.Banken, (ii) edit the obtained data and (iii) display the result. Please note that for confidentiality purpose fake user ids are used in this demo.

In order to retrieve your S.Banken access token you need to send a HTTP POST request to the following URL: https://api.sbanken.no/identityserver/connect/token. Please find below the code used in the video to set up the headers of this request. Please note that in this code, the “…==” should be replaced by a base64 code generated from your user.id and secret. This can be done using this tool: https://www.blitter.se/utils/basic-authentication-header-generator/

Node-red offers a set of nodes to build graphical user interfaces and in particular dashboards. In the following video, we will show how easy it is to build a simple dashboard. Further details can be found in the following resource: http://noderedguide.com/lecture-7-dashboards-and-ui-techniques-for-node-red/.

Finally, thanks to the HTTP input and output nodes. It is pretty easy to expose a Node-red flow as a REST service. The following video will show how to build a simple REST service.

Finally, as explained in the introduction, Node-red has been developed by IBM and has now been integrated with the IBM blockchain tool called Hyperledger. The following resource describes how to combine Node-red and Hyperledger: https://flows.nodered.org/node/node-red-contrib-hyperledger-composer.

For simple experimentations, a basic blockchain implementation, which exposes a REST interface and can thus be easily integrated with Node-red, is available here: https://github.com/lhartikk/naivechain

You May Also Enjoy

Prototype of portal for coordinated sharing of municipal data

A group of students at NTNU has during the spring semester of 2020 developed a web-based application that supports municipalities in coordinated publication ...

Links to data from Norwegian Municipalities

What is open data?

Briefly described, open data is data that is freely available and that can be shared and used for any purpose.